In Upper School, our goal is to build on our students’ natural curiosity and eagerness to acquire and master new information by developing a solid foundation of cognitive skills and learning habits through our inquiry-based approach to learning. Learning in Grades 6-12 incorporates a range of subject areas including Leadership, Design, Theology, Art, Language, Literature, Mathematics, Music, Drama, Personal, Social and Physical Education, Social Studies and Science. By the end of Grade 12, our Upper School students move on with not only a high level of academic and social skills, but also a sincere appreciation and understanding of what it means to be a competent and responsible citizen.

Students in Grades 6-12 at Anchor Lutheran School follow an inquiry based, skill and concept driven Universal Design for Learning. For our students, this rigorous and wholistic approach is ideal preparation for university and career related pathways as it develops the knowledge and skills that will be essential for success throughout life. Teachers plan their units of work around key and related concepts that focus on transdiscplinary skills while making connections to Anchor's Contexts for Learning in order to ensure that student learning is wide ranging, conceptual, integrated, and highly relevant. Inquiry questions guide the units to ensure that students are not simply fed information but learn to seek out answers for themselves. Our students learn skills and strategies in self-management, critical thinking, communicating, research, and collaborating throughout the curriculum at Anchor and in lessons specially designed to develop these approaches to learning. Additionally, the Anchor Christ-centered Profile is a guide for developing student attributes so that we may nurture resilience, perseverance, inquiry, and being a principled and balanced individual.

At Anchor, we follow an inquiry-based curriculum framework that utilizes a Universal Design for Learning which was designed to meet the needs of students and families from a variety of communities. Our teachers design inquiry-based units which ensure rigorous learning through a range of exciting, active, and meaningful experiences for children. Learning at Anchor takes a Christ-centered approach; helping children reflect on their choices within the framework of the gospel, embracing Christian inclusion, and considering multiple perspectives. Our units of inquiry are based on the Upper School Contexts for Learning which run from Grade 6 to Grade 12.
​
Contexts for Learning

An inquiry into this learning context explores the following areas:

Scientific and Technical Innovation
Key question: How do we live in the worlds in which we live?

An inquiry into this learning context explores the following areas:
Globalization And Sustianability
Key question: How is everything connected?

An inquiry into this global context explores the following areas:
Fairness and Development
Key question: What are the consequences of our common humanity?

An inquiry into this global context explores the following areas:
Curriculum Offerings
Students will generally follow the courses listed below. As they move through Upper School, they will be able to make some choices about the courses they will take.
Language And Literature
English Language and Literature courses address concepts of communication, creativity, connections, and perspective through studies of language texts and literary texts. Students will be reading a range of texts including poetry, drama, novels, and non-fiction pieces. They will also be writing a variety of text types including informational, persuasive, narrative and descriptive.
​
The assessment criteria are listed below:
Mathematics
This course explores the concepts of form, relationships, and logic. Our program that gives all students a sound knowledge of basic mathematical principles while allowing them to develop the skills needed to make connections in mathematics to real-world situations and recognize mathematical patterns through investigations.
​
The assessment criteria are listed below:
Science
This course keeps inquiry as the foundation of teaching and learning. Students work independently and collaboratively to investigate topics through research, experimentation, and observation by making connections between science and every day life. The concepts addressed throughout the year include the ideas of change, relationships, and systems. Students are introduced to topics from areas of Biology, Chemistry, and Physics.
​​
The assessment criteria are listed below:
Social Studies
Students are challenged to respect and understand the world from historical, geographical, social, economic, religious, and cultural perspectives. Through explorations that discuss the impact of these approaches on the individual, society and environment, the course approaches concepts of change, global interactions, systems, time, place, and space. Students are introduced to the topics of Geography, History, Economics and Politics in this integrated social studies course.

The assessment criteria are listed below:
World Language: Mandarin Chinese
Grade 6 through 12 students at Anchor will study Simplified Mandarin Chinese. China is presently the world's most populous country and commands the globe's fastest-growing economy. Approximately one-fifth of the world's population speaks Mandarin Chinese, making it the most spoken language in the world today. It is not only the official language in the People's Republic of China and Taiwan – but it is also widely used throughout Southeast Asian countries such as Singapore, Malaysia, and Indonesia, as well as in Chinese communities around the world. The ability to communicate in Chinese will open students to a world of opportunities no matter what career pathway they take, whether in trade, law, politics, the humanities, science and technology, education, or other fields. Furthermore, through the study of Chinese, students not only acquire language skills but also open themselves to an understanding of China's history and tradition. In return, they know and understand the nuances of a culture that is becoming increasingly influential worldwide, including within the United States.

At Anchor, students will learn Chinese from a native teacher in China through our partner program, MEG Languages, which facilitates instruction through synchronized digital lessons twice weekly. Each class's world language teacher will proctor the session, focusing on classroom management and organization for learning. Students benefit from weekly classes and engage in various language, culture, and art-based activities. The homeroom teacher links the children's Chinese language learning to other curriculum areas by applying transfer knowledge and skills.

The assessment criteria are listed below:
PERFORMING and VISUAL Arts
Performing Arts course focuses on creative thinking, skill development, the context of performance, knowledge, and general understanding. Performing Arts is an integrated approach that overviews band, choir, dance and drama. Students will develop instrumental and performance skills, utilize technology to support their musical creations, and will explore the concepts of Aesthetics, Change, Communication, and Identity through class lessons. Throughout the course they practice and reflect on their progress through their process journals, while also presenting and performing for audiences at set dates.

Through studying Visual Arts, students are encouraged to think creatively, develop artistic skills, use their imaginations, see other perspectives, reflect on the context of art, and make connections between the investigation and the practice. The art courses focus on the concepts of aesthetics, change, communication, and identity. Students design a new method or tool to create art and to strive for innovation. They record their reflections, planning, and ideas in their sketchbooks throughout the process.

The assessment criteria are listed below:
Physical and Health Education
Giving students an opportunity to understand and appreciate the value of being physically active and making healthy life choices is an important part of middle school. Students will learn about and learn through physical activity in the PE portion of the course while they learn to respect each other and work collaboratively through the Health portion of the course. Combined, the course addresses the concepts of change, communication, development, and relationships. Students will take part in elements of physical fitness, athletic skill building, aquatics, nutritional approaches and more during their PHE lessons.

The assessment criteria are listed below:
DESIGN
As a link between innovation and creativity, the Design course encourages students to explore the problems and potential solutions available to them. Using the design cycle as the foundation for the course, students use imagination, creativity, research, and collaboration to achieve their final products. The course focuses on key concepts of communication, communities, development, and systems.

The assessment criteria are listed below:
Advisory
The Advisory program provides opportunities for students to work in a small group with an advisor on topics ranging from appropriate technology usage to positive interactions. Students are enabled to reflect on their Christ-Centered Profile attributes in a supportive and challenging environment. Individualized attention and relationship building are at the heart of this program, which is designed to support the development of positive values, strong character, and healthy social interactions within the framework of our shared Christian faith. Advisors also support the Service Learning activities and reflections that students join over the course of the year.

The Anchor Christ-Centered Profile is listed below:

The assessment criteria are listed below:
​
Theology
The characteristics of Christian spirituality, its roots in scripture, the balance between contemplation and action, its communal dimension, its attitude to the world, are analyzed through the study of a selection of men and women whose lives exemplify various aspects of Christian spirituality over the past two thousand years. The course examines notions of transcendence and immanence, individuality and collectivity, nature and the divine.

The assessment criteria are listed below:
Sample Schedule for 22/23 School Year 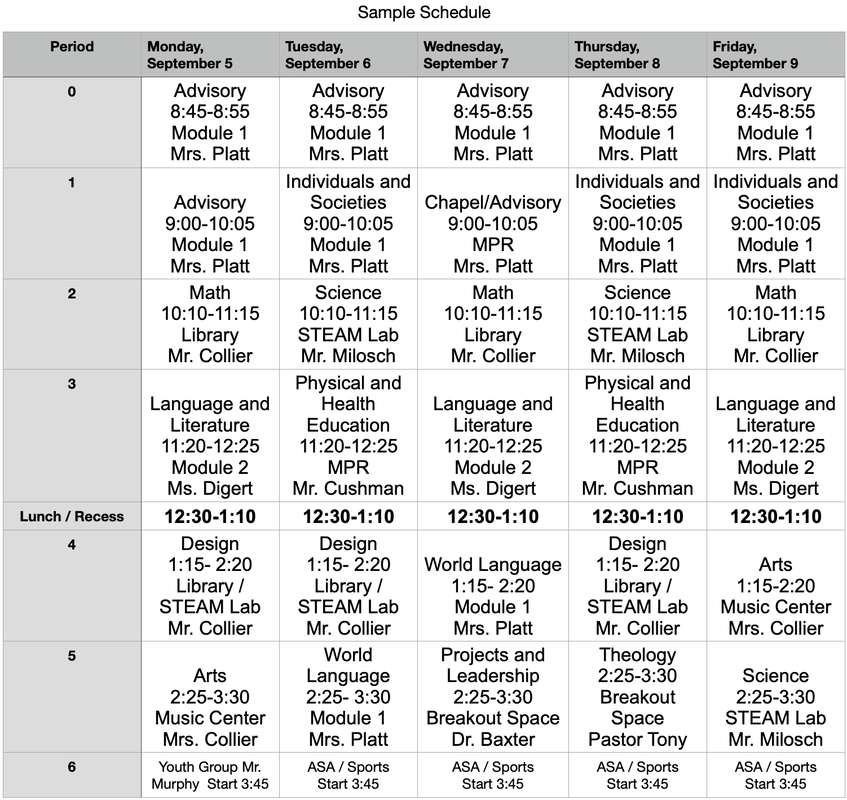